Fishing the Flathead Valley and Montana 2022. 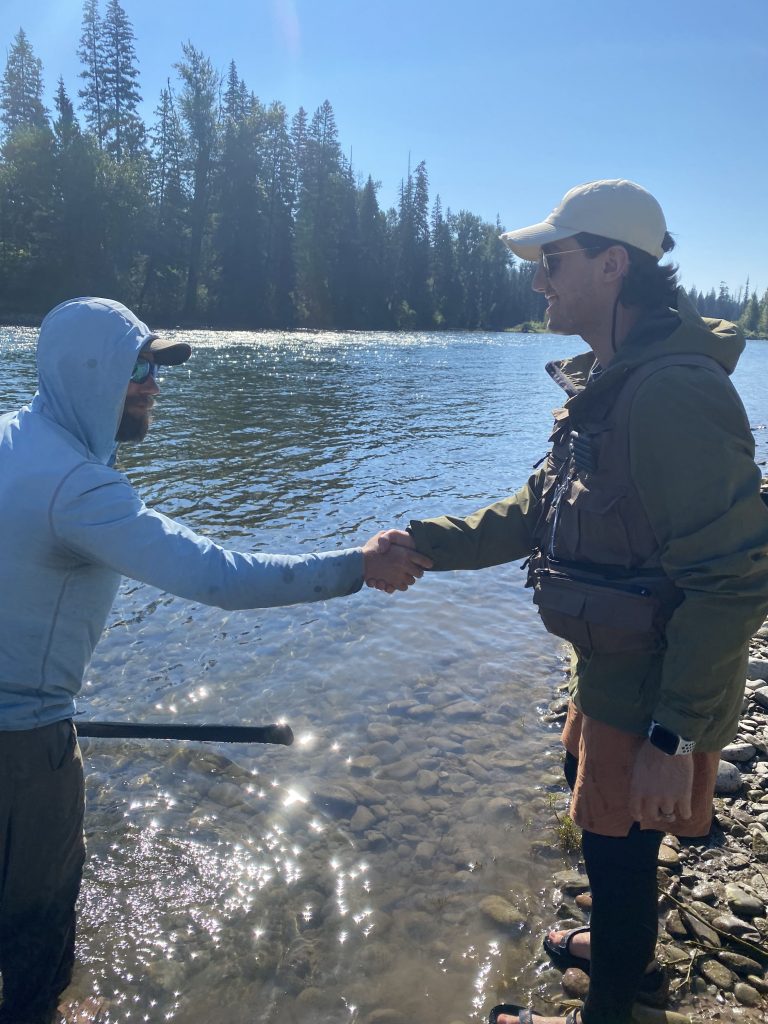 We got it all in 2022 in regards to fishing in the Flathead Valley and around the great state of Montana. Rainy days (lots), snowy days (some), sunshine (more than our fair share), soulshine (everyday), good days (hurray), not so good days (whoops) but overall we feel like we got the long end of the stick and are damn proud of what we were able to accomplish this year.

Anglers on our home waters in the Flathead Valley were treated to prolific hatches and a river that changed its look after an above average high water season. The folks we guided on the Missouri River were treated to some of the best dry fly fishing that we have seen in the past several years and on our smaller waters, anglers were treated to above average trout willing to eat a well placed hopper.

Clients were stoked to be on our hallowed waters. Guides were dialed and trout were generally on the feed. From someone who makes a living on all three of those things, you can’t ask for much more. 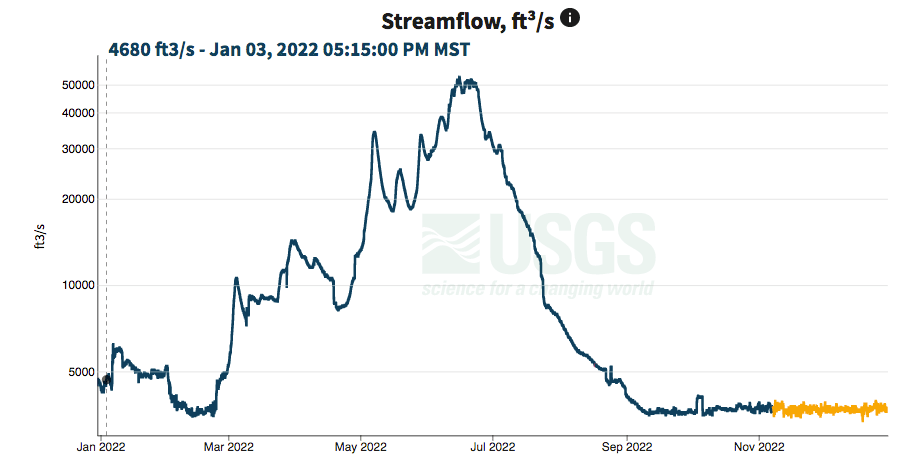 When the snow in the high country finally started melting, it started out as a trickle. Eventually, it turned into a cascade and once it hit the valley floor, it was a raging force that did what it wanted. The big river saw a peak this year of over 50,000 CFS which was more than enough flow to move structure within the river channel.

High water modified the river bottom in several areas throughout the entire river corridor but the most drastic changes were seen on the big river. Holes that once produced, didn’t. Well known riffles and seams ceased to exist. Stalwart log jams washed away like matchsticks. New runs formed.

From a guiding stand point, when a river changes like ours did, it’s almost as if you are dropping your boat into the river for the first time once the high water subsides. Old knowledge of how the river fished has to be tossed out and you look at the river anew. Eyes wide, soaking in your new surroundings. Ever adaptable, our guides did a great job sorting out the new river habitat and finding where the trout wanted to be. 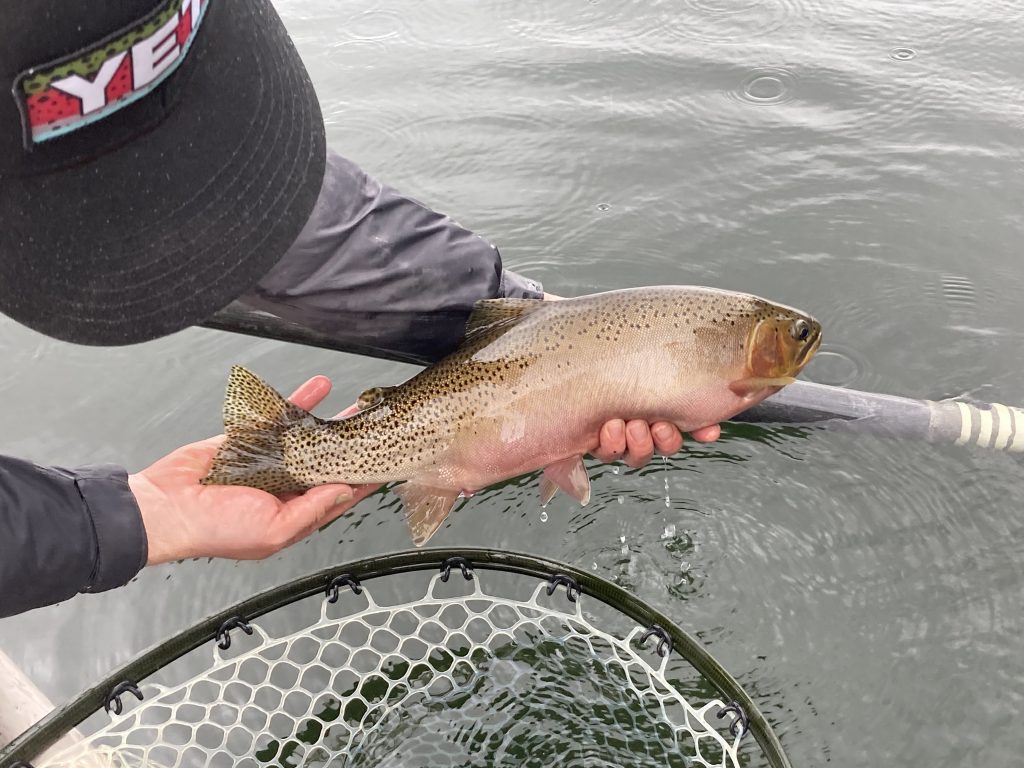 Spring was what every trout guide dreams of. Wet and cold. Albeit, we had some cold guests, these conditions brought on exciting fishing, good bug activity, and more importantly, kept the snow in the high country. By mid March the annual migration of trout into the big river was in full swing.

Mature trout tend to lead the parade into the big river system and anglers can find their biggest trout in the spring. Nymphing was king per usual with stoneflies, mayfly nymphs, and worm patterns being most productive. There were moments of glory with the dry fly. We pride ourselves in the Flathead Valley for having the most productive dry fly fishery in the state so we would be remiss if we didn’t get a few on the dry.

Small dries were key in the few opportunities that we had trout up and feeding on the surface. Parachute patterns in size #16 and #18 were most frequently used. That is pretty small for the type of dry fly fishing that this area is known for but trout were being pretty selective on which bug they wanted.

There were more than a few guides that mentioned the fishery appears to be becoming more technical. Was it just this year? Are our trout reacting to the uptick in fishing pressure? Not sure, but this was not the year for the chubby chernobyl.

The hottest days of summer brought early launch times and happy hour times. Often our guides are eager to show clients the best time possible on the water which can result in long days stretching into late afternoons and evenings.

In August, that was not the case. We got on the water early and were done fishing before the river saw its daily high water temperature. The reason for that is we believe the health of the fishery is more important than catching trout. Hands down. No questions asked. Our amazing clientele understood that philosophy and were ready bright and early.

During this time of year terrestrial fishing is hitting its peak. Unlike the previous year, spruce moths made a monumental appearance. These tan colored moths are notorious for being bad fliers and trout seem to relish when these moths dive bombed into riffles, pools, or wherever they landed. Ants were also a great pattern and although we had to fish them smaller than previous years, some of our most memorable trout of the season slurped ants on big and small waters.

We fished well into late October this season. Weather stayed warm until about the 2nd week of October and fishing was pretty good most days. Dry fly fishing was still a daily occurrence until the snow started flying. When the landscape turned white, we dusted off the bobbers and found that drifting small streamers and stonefly patterns attracted trout quite nicely.

Small mayflies started to reappear with cooling of water temperatures and again we found ourselves fishing smaller than usual patterns to trout that wanted specific patterns. Laughs and “Woots” were heard throughout the river in the fall months from happy folks getting their chance to hook native West Slope Black Spotted Cutthroat trout.

We generally have a different clientele during this time of year which generally consist of older folks, newly weds, and folks looking to escape the peak season crowds at Glacier National Park. All were fabulous to hang out with and we hope to see them next season. 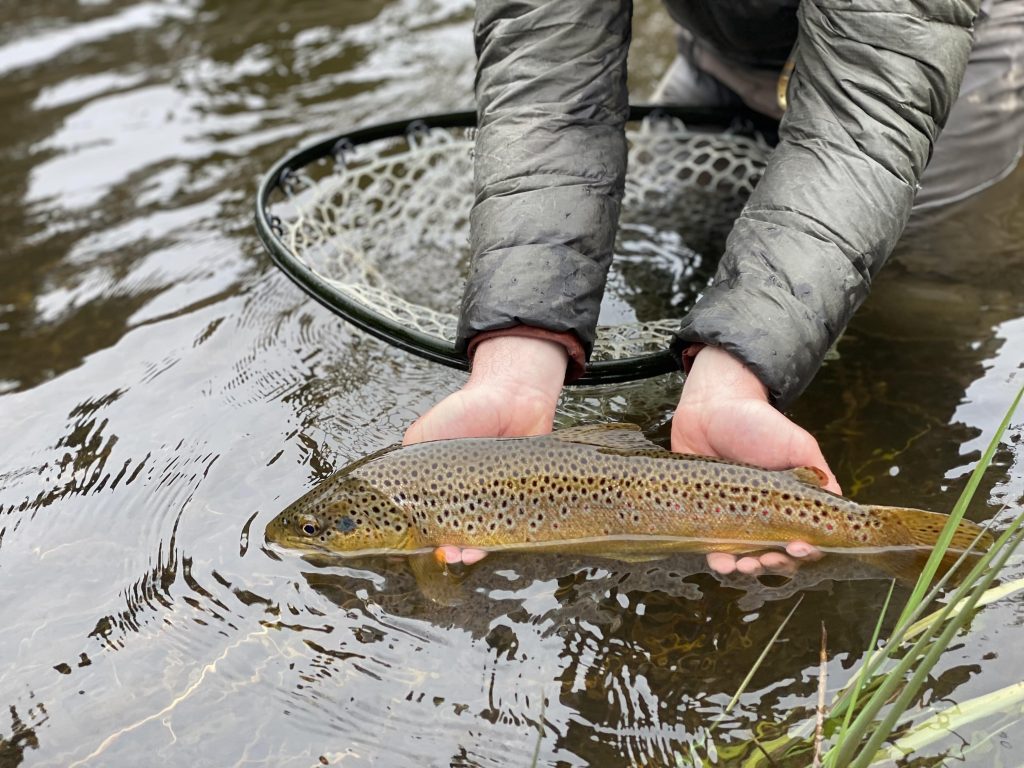 Our small water fished pretty well this season. It was one of the better “big fish” years that I can remember. Guides experienced bewildered clients not believing what just hit the net. Flows stayed high for most of the spring season allowing anglers to fish submerged grasses and abrupt bank edges which made some of our bigger trout vulnerable.

The spring weather kept dry fly activity to a minimum. We were forced to stare at the bobber.  Mayfly nymphs in sizes 12-16 were probably the most used bugs of the season but large stoneflies seemed to bring the biggest trout. When the conditions were favorable and bugs were flying, the dry fly bite was well worth the price of admission. With several nice trout slurping drakes, caddis, stoneflies or whatever was inhabiting their feeding lanes.

We ran more trips on small water in the months of August and September than we have done in the past. Hopper fishing was exciting. We saw fish move into fast water looking for hoppers getting pushed off the banks. Large tan and black hoppers were most productive for us. When we decided to throw a dropper on, it was double trouble with fish eating both options. Trout were active, healthy, and our clients loved stalking trout with hoppers. We will continue to utilize our small water fisheries more in future seasons. 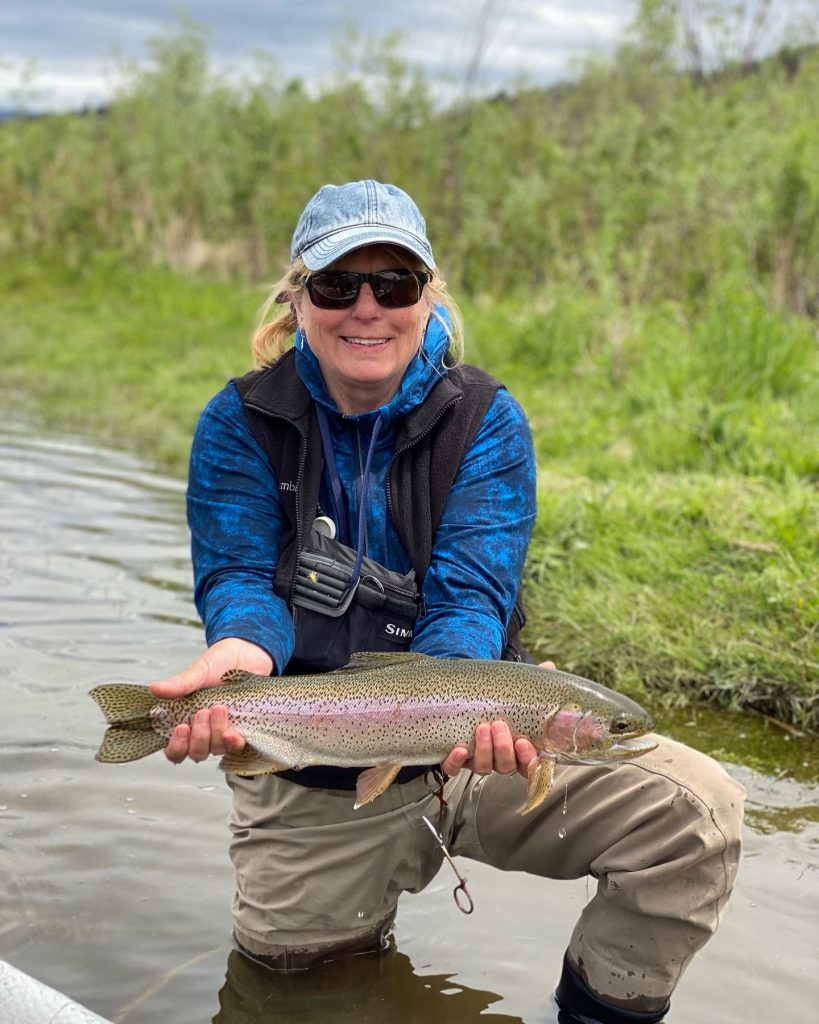 We have an annual tradition at Wild Montana Anglers in June. A select group of us leave the Glacier National Park region to guide on the world famous Missouri River in the vortex of a town known as Craig, A.K.A Craiglandia. Why? It’s a weird and exciting place that can be some of the best trout fishing you can imagine in the month of June. It also helps that we’re weird, so we fit right in.

Historically, June brings on a smorgasbord of bugs on the Missouri River. When I say a smorgasbord, I am not kidding. PMD’s (pale morning duns) and Caddis can literally blanket the top of the river on a daily occurrence. This past season was one of the most bountiful PMD hatches in recent memory. For the anglers that presented PMD’s and caddis correctly, the rewards were generally 16-20 inch rainbow and brown trout on the end of the line. Holy smokes it was a good dry fly year.

On days that didn’t allow for productive dry fly fishing (windy and rainy days) nymphing was productive with crayfish, sow bugs, PMD, and caddis nymphs. Water levels were relatively consistent, which aided in the good dry fly bite and temperatures were ideal (52-60 degrees). Off the water, clients and guides dined together, shared libations together, laughed and plotted out future trips to Craiglandia. It was a successful pilgrimage that we can’t wait to repeat next season.

Looking Forward to Next Season 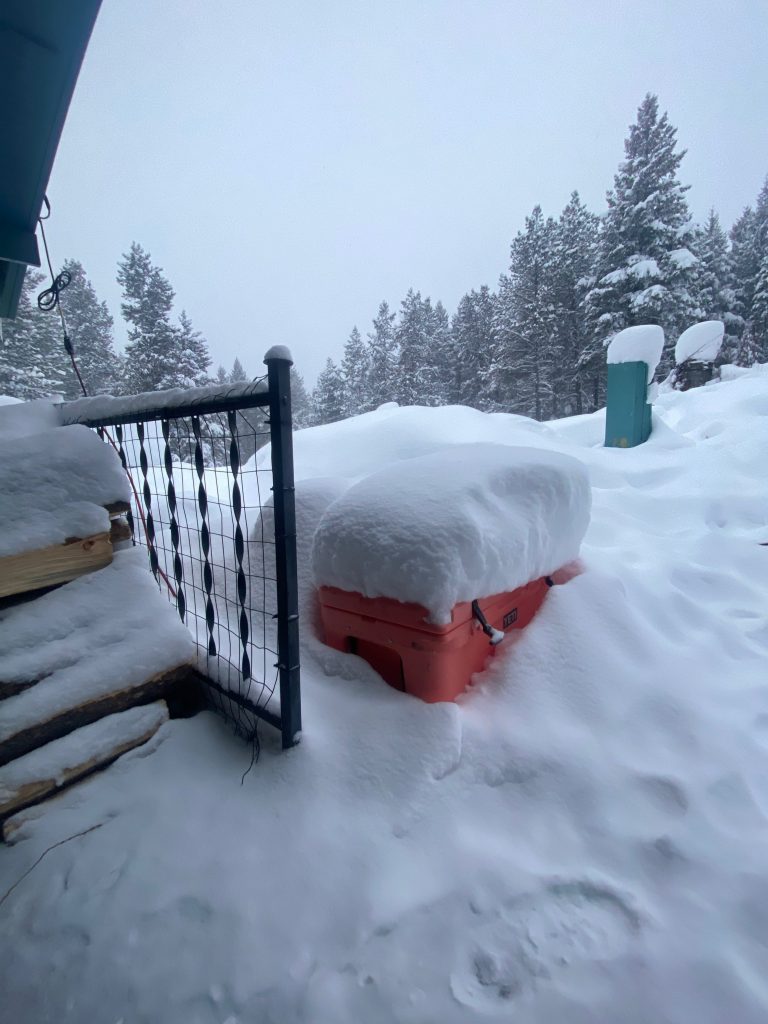 Cold water as a result of the winter snowpack is the lifeblood of what we do. As of right now, the snowpack is shaping up nicely. Keep your fingers crossed, do your snow dance, or whatever ritual that brings the snow to our high country. As of right now, snow has been piling up in our drainage so keep up the good work.

Once it’s time to get back on our hallowed waters in and around Glacier National Park, we will be ready. We’ll be ready to show people how amazing this ecosystem is through the lens of fishing so we can ensure that this place is cared for and preserved for future generations. Until next season!