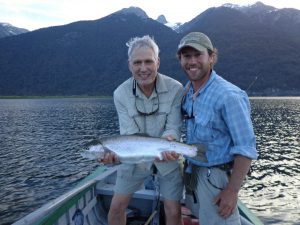 Mark Fuller is the owner and outfitter of Wild Montana Anglers. Born and raised in the foothills of the Appalachian Mountains, he began his love affair with fishing at an early age while watching his grandfather catch trout on the Little River in the Smokey Mountains. While earning his Biology degree with an emphasis in Wildlife Management at Western State Colorado University he began his guiding career in Gunnison, Colorado. Guiding has taken him to Alaska, Colorado, Montana, and Patagonia, Chile in search of the best trout fishing in the world. Always searching for that one river system to not just guide on, but grow old on, he found it in the Flathead Valley. Mark is an active member of Trout Unlimited, Back Country Hunters and Anglers, and many other outdoor organizations whose goals are to keep wild, pristine areas intact for future generations. When not guiding, he can be found fishing, exploring, hunting, and hiking with his wife Kimberly and black lab, Shooter. 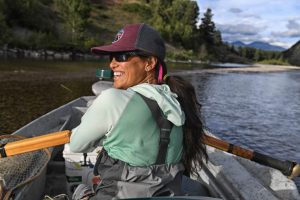 Hilary is owner and operator of Lary’s Fly & Supply in her hometown of Columbia Falls, Montana, near the confluence of the three forks of the Flathead River. She grew up on the Flathead system and began guiding more than two decades ago. Hilary knows the local rivers inside and out. When she’s not sharing her home water with guests from all over the world, Hilary volunteers as an instructor for Casting for Recovery, serves as a national board member of Backcountry Hunters and Anglers, is a climate activist with Protect Our Winters and writes for a number of outdoor industry publications. Hilary is an ambassador for YETI, Orvis, Costa, Fishpond, Patagonia, Loon Outdoors, and Scientific Anglers. She loves hanging out with her two teen daughters, especially when they volunteer on the oars. 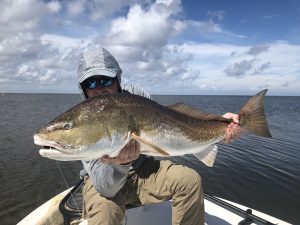 Will Beggs hails from the great state of Georgia. A die hard Dawgs fan, excellent guide, and all around fun guy, Will is in high demand wherever he guides. He started his guiding career in Colorado chasing native cutthroat trout in Rocky Mountain National Park but it didn’t take long before large rainbow and brown trout were calling his name on the North Platte River in Casper, Wyoming where he has been guiding the past half decade or so. We are lucky to have Will for the mid to late summer months in the Flathead Valley before he takes off to hunt salt water species along the Florida coast.

LeAndra grew up in Sandy, Utah and made her way to Missoula to attend University of Montana. She graduated in 2013 with a degree in Sociology with an emphasis in Rural and Environmental Change. Towards the end of her college career, she began guiding on the Flathead River System where she continues to guide. During the winter she returns to Utah to enjoy skiing and working at Alta Ski Area as a ticket manager 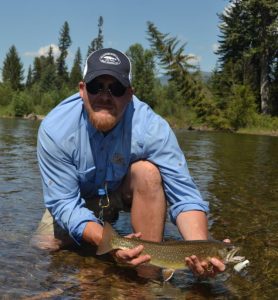 John was originally from “back east” and moved to Idaho when he was 15. He attended the University of Montana and started guiding in Montana in 2005 after he finished his degree. Since then he has had the opportunity to guide in Alaska, Idaho, and Wyoming, as well as in Norway for Atlantic Salmon while he lived overseas for three years. He has fishing experience from all over the world but is happy to have moved back to Montana and now calls the Flathead Valley his home. His wife, Rachel, has her PhD in Systems Ecology and is currently researching stoneflies on the Flathead river system. Along with guiding, he has a small farm where he and his wife raise two small boys along with a golden retriever, vegetables, pumpkins, and Christmas trees.